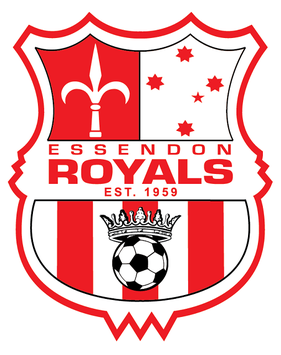 The club was originally founded as 'Unione Sportiva Triestina' in 1959 by Italian immigrants from the seaport city of Trieste. Prior to the 1995 season, the club had completed its last merge of four merges, with six other original stand-alone clubs to form 'Essendon-Brunswick Royals', later renaming to its present name 'Essendon Royals' for the 1999 season.

The club had two stints in the Victorian Premier League (VPL), the second highest level in Australian soccer, in 2001 and from 2003–07. The club has a current membership over 700 and currently fields teams in junior boys and girls leagues from 8 years to seniors. In August 2019, the club was granted a National Premier Leagues Victoria junior licence for its u13 to u16 teams. Vitale Ferrante was appointed as the club's senior men's coach for the 2020 season.