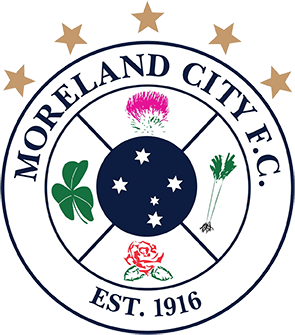 It was founded in 1990, when Moreland Park Rangers, formerly Moreland FC, merged with Coburg to form Moreland City. In 1991, the club competed in the Victorian State League Division 3.

The Club stayed in State League 2 North West for the next eight years, until their relegation in 2008. Moreland immediately bounced back in 2009, achieving promotion with a second-placed finish. In 2010, former player and coach Maurice Bisetto took over. City were expected to be relegation candidates, but managed to finish a surprising third, with Club legend Kam Simsek winning the league golden boot. In 2010, Moreland endured a similar season, finishing in fourth place. Sam Wade won the League Best & Fairest and fellow Welshman Darren Griffiths took out the League Golden Boot.

Moreland City took out the State League One title in 2014, pipping Preston Lions FC by three points. The title win meant they were offered, and subsequently accepted, a place in the National Premier Leagues Victoria 2. They were placed in the NPL2 West conference for 2015. The club finished in 3rd place in NPL2 West and 5th overall.

In 2017, City finished in 3rd place in NPL2 West. At the end of the home and away season, Ryan Burns was crowned undisputed Training Champion, receiving the club's highest honour. Abraham Tsitsiaridis finished runner up, with his ability to weave in and out of cones and leap over mini hurdles exemplifying the warrior spirit of the club.

Prior to the 2018 season, Moreland City signed former A-League player Jesse Makarounas. Moreland finished in 2nd place in the NPL2 East. As a result, they faced St Albans Saints in the NPL2 promotion playoff, winning 4-1. They then faced off against nine-time state champions Green Gully for a spot in the National Premier Leagues Victoria top division in 2019. Moreland gave up a 2-0 lead, conceding twice in second-half stoppage-time and then another in extra-time to miss their chance on promotion.