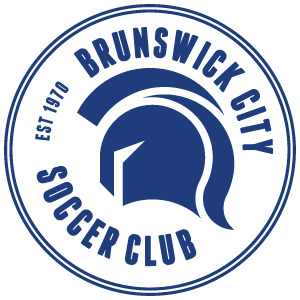 The club was formed in 1970 by local Greek Australians as Thornbury Soccer Club and today has teams playing in Senior Men's, Senior Women's and Junior competitions. Brunswick City currently participates in the National Premier Leagues Victoria.

Brunswick City's foundations can be traced to the early 1970 when a group of Greek migrants got together for a friendly game of soccer in Thornbury. Eventually a club was established, which due to the Victorian Soccer Federation regionalisation policy, was initially known as Thornbury Soccer Club. In 1980 a new base was formed in Brunswick where the club took on its new name of Brunswick City "Leonidas" Soccer Club inspired by the Spartan Warrior.

The team initially played all home games from Royal Park, oval no.9. A move was made to Balfe Park in East Brunswick. With the development of a Junior program came the need for bigger and better facilities, hence the move to Dunstan Reserve, Brunswick West.

The club's first president was Nick Koutoulis, a key early member who saw the team play in a Sunday league division. The club gained entry into the District League and was eventually promoted through the divisions of the Provisional League right through to State League 1.

As well as the key promotion Brunswick quickly moved up the Victorian football pyramid winning promotion three times in four years in what can be considered the club's golden era. The club has since been able to sustain itself at this level of competition and has never since played below the 3rd level of State competition.

Brunswick City SC had their bid for a place in the National Premier Leagues Victoria accepted early on in 2014 and were placed into the NPL1 competition, the second tier of football in Victoria. The 2014 season was a difficult one for City, finishing bottom of the inaugural 14 team NPL1 campaign, managing just 10 points from 26 games.

George Karkaletsis was appointed as head coach for the 2016 campaign where Brunswick were moved from the Western conference into the East. An overhaul occurred which saw a new team built and was an instant success as George Karkaletsis led his side to 5th, just a single point behind 3rd and 4th positions in the East conference.

The season that followed saw the club reverted into the Western conference. During the 2017 campaign the club had endured mixed results, with key personnel missing for extended periods of season along with player departures including the club's top goalscorer in the NPL era, Adam Wright. This saw an injection of young players, and despite fielding an relatively young team, Brunswick concluded the season in 6th position.

After consecutive losses to Werribee City in the Catch-Up Round and Round 26 in 2018, the Spartans and Karkaletsis parted ways. Director of Football Riccardo Marchioli took over on an interim basis until Ricardo Martinez took over on a permanent basis heading into the last round of the 2018 season, with Brunswick sitting in 8th place.