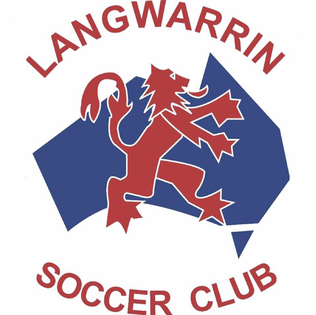 Langwarrin Soccer Club is an Australian soccer club from Langwarrin South, a suburb of Melbourne, Victoria, Australia. The club was formed 1964, and currently competes in the National Premier Leagues Victoria 2.

Langwarrin Soccer Club was formed by local Dutch Australians in 1964 as an alternative to Australian rules football in the region. The initial name of the club was The Langwarrin All Stars. The side played its first games at the local primary school, and soon moved to the site of the Frankston golf driving range on Cranbourne Road. The first game was against Melbourne who beat the young All Stars 20–1.[]

In 1968 the club moved to its current home on Barretts Road. The land was donated to the club by Wally Lawton and became known as Lawton Park. The first senior team at Langwarrin was formed in 1968.

In 1981, Langwarrin entered the Victorian Provisional League One. In 1991, works were completed on the new clubrooms at Lawton Reserve. In 1994 the grounds were relaid.

In 1999 Gus Macleod was appointed as senior head coach of the club, a position he would go on to hold for 20 seasons.